Today's post is long overdue, because I actually finalized track 05 last month (and the pre-production track list reflects that fact). This track is a very special one. It's a perfect blend of orchestral and synthesizer bits and it's basically what Mark originally envisioned for Levay's reinterpretation of the main theme for the original "Airwolf Themes" CD2... way back in the previous century.

This particular version of the theme has appeared in Airwolf only once - during the "Journey to Red Star" in the "Movie version" of the pilot episode. The synthesizer bits were based on Season 1 theme - not the opening/closing credits though, but rather the in-episode aerials and lair startup sequences. The orchestral arrangement was based on the latter S1 version, which was used exclusively from "Echos from the Past" onwards (with the sole exception of "And They Are Us" closing credits for which the first version was used). 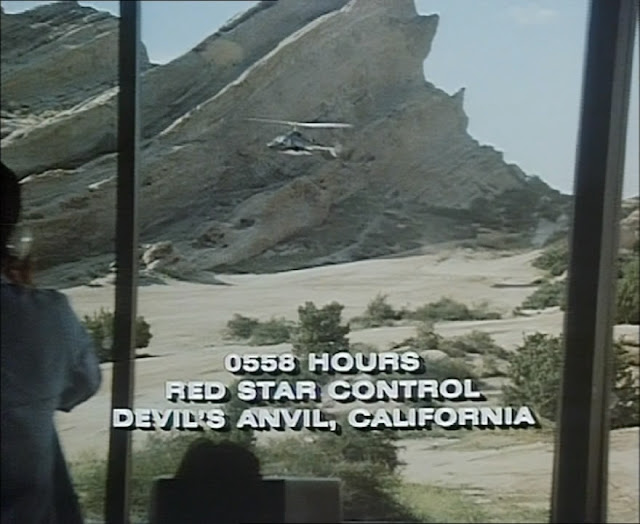 Since the original version in the "Movie Pilot" was rather short (90 seconds or so) I had to do some "creative extrapolation" to produce a full-length main theme, which was actually not that hard given that the building blocks (S1 synth theme and EFTP orchestral theme) were at my disposal. I think I managed to pull it off - the parts missing from the original version, the Ascending Bridge and final verse + final crescendo sound absolutely outstandingly "organic". They actually remind me of "Eagles" finale aerial a lot (which was the show's second attempt at a synth + orchestral version... and which the fans requested for AWT2), but they sound much more powerful. The resemblance to "Eagles" is of special value for me: "Eagles" first aired in Poland on my birthday and hearing this special main theme version was really the best birthday present I could imagine!

Having the orchestral elements inside this track required a great deal of patience from me. It once again proved that you can have the best orchestral samples in the world at your disposal, but unless you put soul into it, or, strictly speaking, a great deal of articulating subtleties like subtle pitch and volume changes they will still sound artificial and "plastic".

Oddly enough, I began my work from Ascending Bridge. Most parts don't sound that complex - you have the cello seemingly steadily playing the ascending notes, a tremolo violin ensemble that slowly plays its chords and the rapid brass ensemble staccatos. I knew brass ensemble will give me headaches - first, figuring out the exact notes that are there, then recreating the "accent" notes which employ bending the notes' pitch (in plain English - it's the distinctive "woof" sound). It took me several days to crunch those (the aerial from "Mind of the Machine" while not of the most pristine quality had the trombone section pretty prominent) - the ability of my Motif XS to stack up to 8 elements each with its own Pitch Envelope made the job a lot easier! However, in order to have some context to work with I began with the cellos and violins. It wasn't as easy as anticipated: I had to spent extra time recreating portamentos between cello notes and tweaking the subtleties of pitch and volume of the tremolo violins. The pitch instabilities occur naturally: a violinist cannot stay perfectly in pitch while playing tremolo, especially when he has to increase volume - which happens near the end of the Ascending Bridge. Below is a screenshot (dated February 3rd - as you can see only "Celli" and "Violins" tracks are present) from my DAW software showing the envelopes of pitch and volume of tremolo violins: 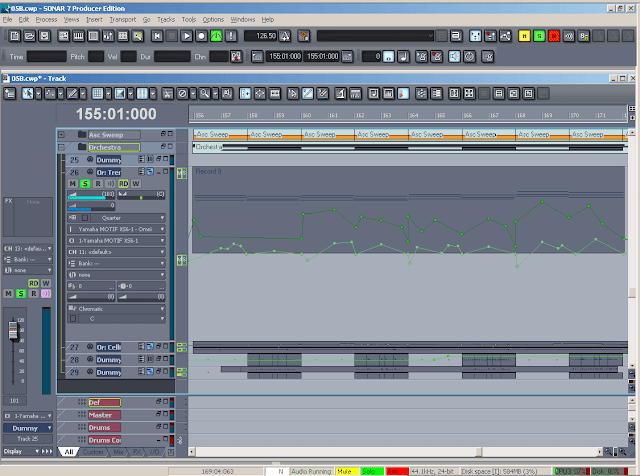 I could go on. Needless to say - you probably won't be aware of that while listetning to the final product, but the track is incredibly detailed. Some of the parts have 4 or 5 envelopes like that - controlling volume, brightness, attack time and other nuances, like for instance the violins during Descending Bridge, which you will hear in just about a minute...